I love flowers and greenery. Outside my back door, the slope is filled with hills of ivy, that don’t look cemetery like, and eucalyptus trees transplanted from who knows where. Occasionally the birds and butterflies flitter by and standing with bright eyes, I watch them on their rounds. Alas, although I’ve filled my hummingbird feeder, they’ve abandoned me this year.

Indoors vases of flowers replenished weekly are a source of joy and solace. I chuckle sometimes remembering my late mother who hated cut flowers but could make anything grow inside and prided herself on the many plants splayed over her kitchen window. Alas, I inherited many things from her, such as jewelry, impatience, a temper, but not her green thumb.

When I was in Morocco a couple of years ago I splurged on a marble coffee table. It beckoned for an orchid to sit on one end. I purchased a purple one and every week tried to remember to put in an ice cube to keep it going. After about three months the leaves and flowers dropped and all that was left was a stick. “You can bring it back,” advised a friend.

Hard as I tried, the purple orchid and none of its successors obliged me despite my CPR.  More recently I resorted to a succulent, which hopefully will outlast me, but who knows. That’s my homage to indoor greenery if you don’t count the fake flowers purchased years ago in my bathroom vase.

Alas, though the patio surrounded by green all around, the actual space was a disaster. Old pots piled up empty, two brass pots purchased years ago held some fake plants, and just as live ones do, began to shed leaves…unbelievable. Hanging on the walls are remnants of journeys—hamsas from Israel, a prayer eye from Turkey, butterflies from Barcelona, painted plates from Greece, and a wooden mask, peeling and fading from Peru (big mistake hanging it outside.) One-pot contained sherds of jar handles from a dig in Caeserea that somehow made it home when we returned from our year in Israel.

It was time for a makeover of the patio. My trainer said Home Goods has ‘real’ fake plants. That sounded like a solution for me. Unfortunately, rotator cuff surgery kept me homebound for too many weeks. Chuck came to help, and although we made outings, mostly to TJ’s and Ralph’s, we never made it to Home Goods. Besides, Chuck is worse than me in getting things cleaned up and organized.

When Chuck left I called my young friend Andrew, a Villanova student going crazy at home, to be my personal assistant until he had to return to Pennsylvania for his junior year.

“The first thing we have to do is clean the patio,” I said. “Once it’s clean we can go to Home Goods and get some nice fake plants.”

He stood, hands-on-hips, looked over the patio, and shook his head, “How about succulents?”

“It sounds like a good idea, but I even let a cactus die out here,” I answered.

“Don’t worry I can get you some succulents that will work with minimal care.”

Andrew swept, washed, dumped, and had the patio habitable in a f

ew hours. He looked at the pot of sherds and said, “We can use these in several places to hold down the plants.”

A few days later Andrew returned with several plants and magically transformed the patio. He took the sherds and put them in a glass vase, obtained from I know not where, to stand as an art object amid the greenery. The brass containers, which had at

tributed to the demise of the fake plants, he stuffed for drainage, placed plastic to catch water, placed the pots in them, and then took some ancient jar handles to help them stay in place. He filled a couple of more large pots, and some small ones, but a few empty ones remained.

Andrew returned to the east coast and I was determined to finish the job. Now, able to drive, I went off to Home Depot for some living plants where a nice young lady helped me choose some for the shady patio with intermittent sunlight.  Once home the new succulents were placed in the remaining pots—well alas one is too big for an existing pot—and I now have a verdant garden. (This presents a new dilemma 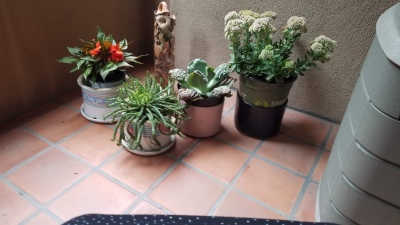 —to take back the plant, to buy a pot for it, and buy another plant, oy vey!)

Still, it’s a pleasure to sit and read and write among the succulent garden for as long as it will last…I just hope I remember to water them occasionally.